Errim, a harissa of Menzel M’hiri who speaks for herself 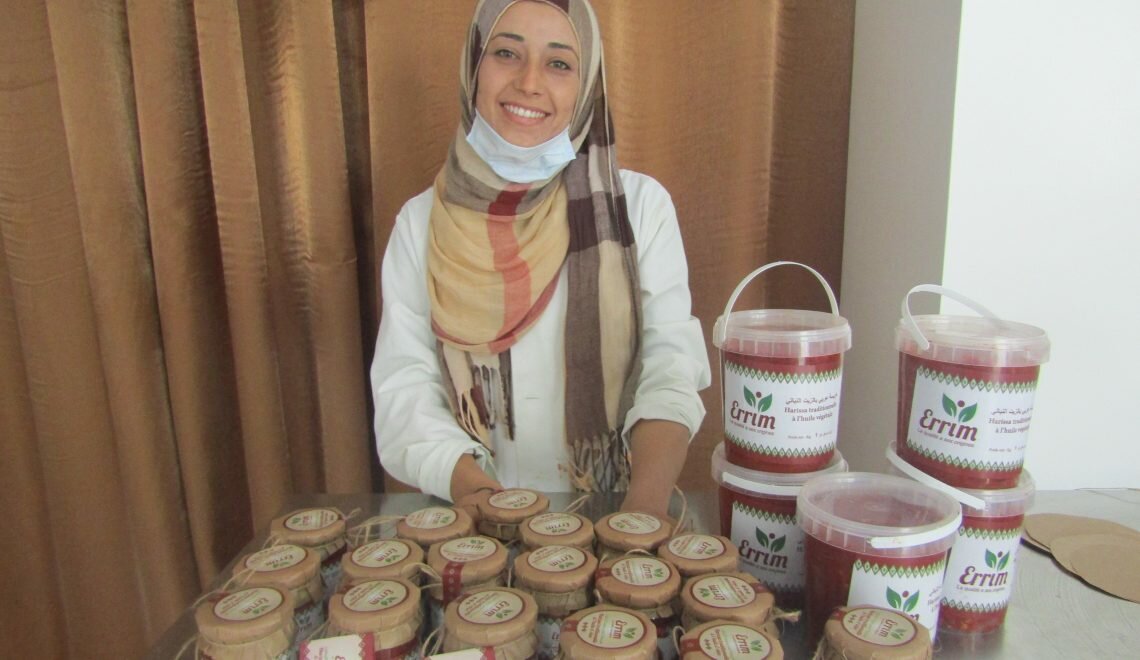 The Regional Commissariat for Agricultural Development of Kairouan organized a day around the social and solidarity economy in Kairouan in collaboration with the delegation of Menzel Mhiri, the Mutual Society of Agricultural Services (SMSA) TAHADI and the project PAMPAT. The SMSA TAHADI based in Menzel Mhiri, which groups 164 rural women, is considered a Tunisian model of success for women. The day ended with the tasting of a menu based on harissa ERRIM – the flagship product of the SMSA TAHADI – prepared by Chef Salah Guesmi of the Brijja restaurant in Kairouan who won the National Competition of the Best Harissa Menu 2018.

In Tunisia, particularly in rural areas of the interior governorates, women continue to face a lack of economic opportunities. Agricultural work is often poorly paid and working hours are not always compatible with family obligations. The principles of the social and solidarity economy can help overcome the difficulties and improve the incomes of rural women and their families. With the aim of increasing economic opportunities in decentralized areas, the Ministry of Agriculture, Hydraulic Resources and Fisheries is promoting the creation of mutual societies for agricultural services (SMSA). The SMSA are guided by a spirit of solidarity economy, but with a commercial vocation. In the governorate of Kairouan, several SMSAs have been established in recent years with the support of the Regional Commissariat for Agricultural Development (CRDA). SMSA Tahadi, which was established in 2013 by 164 women from the Menzel Mhiri delegation, has become Tunisia’s first fully female SMSA. Today the products of “Tahadi” are marketed throughout Tunisia and exported to Switzerland. To raise awareness of the SMSA experience to the general public, a day around the social and solidarity economy was organized in Menzel Mhiri on Thursday, May 3, 2018. This day was organized by the Kairouan CRDA with the support of the Menzel Mhiri delegation, the SMSA Tahadi and the Market Access Project for Agrifood and Terroir Products (PAMPAT). The project is implemented by the United Nations Industrial Development Organization (UNIDO) in collaboration with the Ministry of Industry and the Ministry of Agriculture and is funded by the State Secretariat for Economic Affairs. the Swiss Confederation. The SMSA Tahadi went into production in 2015 with its flagship product which is none other than the traditional harissa with olive oil prepared from dried sun-dried peppers. The trademark registered by SMSA for its sales activities is “Errim”, a small gazelle. The name was not chosen by chance. The gazelle has always been a symbol of feminine beauty and authenticity in Tunisia and reflects the spirit behind the solidarity economy initiative.

The SMSA business model is based on the production and sale of high quality local products. The idea of ​​creating the SMSA was born from a simple continuous observation. In fact, according to Najoua Dhiflaoui, president of Tahadi, “rural women have a great capacity for work and excellent skills, but they have difficulties in transforming their ancestral know-how that is typically female into a remunerative job”. That’s why the women of Menzel Mhiri have come together to develop their activities and manage the entire production chain together. It was not easy at first and that’s why they decided to name their SMSA “Tahadi” (challenge in Arabic).

Miss Hamida Azzouzi, a member of the SMSA Tahadi explains the secret of the success of the SMSA: “Our production techniques are both traditional and modern. We produce in a traditional way, which requires a lot of labor, and thus helps to create employment opportunities for women. On the other hand, we respect all the rules of hygiene and quality required and we carry out laboratory tests in this direction. In 2017 the SMSA has also obtained the technical approval for export of its production facility. Our know-how was also rewarded and recognized during the Tunisian Local Produce Competition where we won a gold medal for harissa in December 2017. “

In the small town of Menzel Mhiri where there are no industrial processing companies installed, the SMSA has now become a reference. And not only to Menzel Mhiri. ERRIM is considered a Tunisian model of success and arouses the interest of foreign delegations and journalists.

Several articles on the ERRIM experience in Menzel Mhiri have appeared in the media of 37 countries on 4 continents. For a better positioning on the market, today women have begun to work on the diversification of their offer and aim to implement the organic certification for harissa ERRIM.

From the beginning, the SMSA received the support of the PAMPAT project for aspects relating to the management, production, marketing and advertizing  of its special Harissa recipe. The women of Tahadi are proud of their journey together and look to the future with ambition and optimism. They want to overcome even more challenges and help position the governorate of Kairouan not only as a cultural destination but also as a gastronomic and gourmet destination.

The day of May 3, 2018 was closed by the tasting of a menu with harissa ERRIM prepared by the Chef Salah Guesmi Chef of the restaurant Brija in Kairouan who won the National Competition of the Best Menu based Harissa 2018 organized by the Groupement des Food Conserves Industries and the Hammamet Tourism Training Center. Even the dessert – the chocolate mousse – was enhanced by the harissa ERRIM.