“Alf Thneya we thneya”: “Borj Lella” or his majesty the sheep’s cheese! 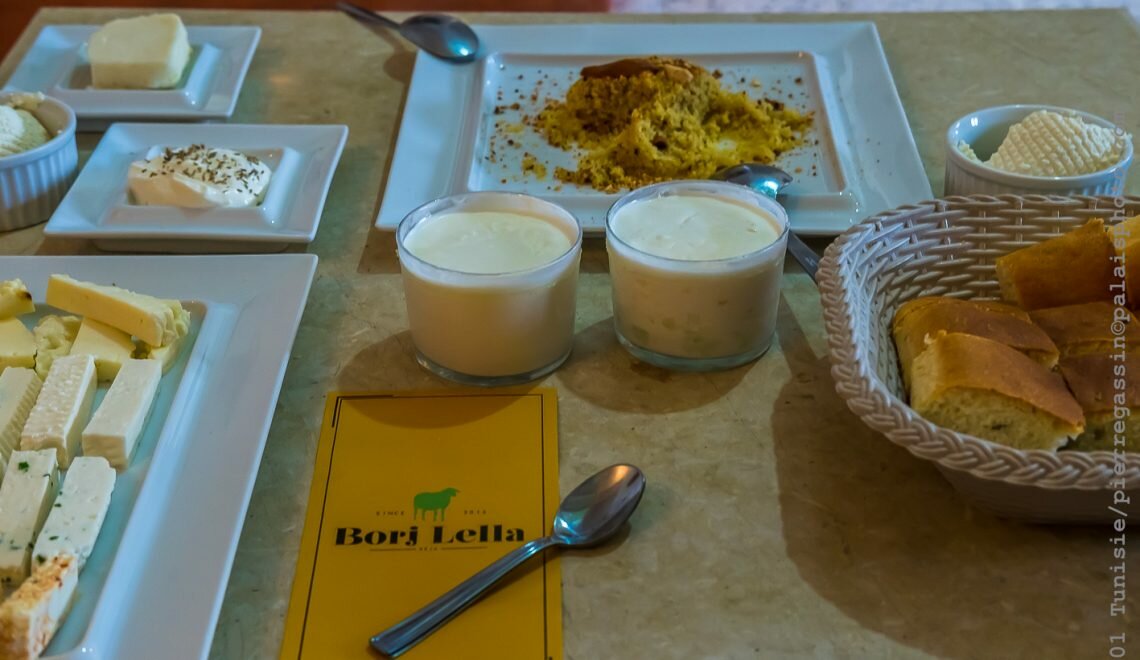 Borj Lella – In this new episode of “Alf Thneya we thneya”, sponsored by the Arab Tunisian Bank, http://www.atb.tn we head for Beja, one of the richest Tunisian cities in terms of culinary heritage.

To listen to the podcast:

20 kilometers from Beja, on the road to Nefza and precisely to Oued Elbagrat, in a farm called Safsafa, we go to meet a cheese dairy like no other. it is Borj Lella where the cheese is produced mainly from sheep’s milk. Zied Ben Youssef is the proud owner of the cheese factory. He tells us: “Borj Lella produces a dozen different cheeses throughout the year. There are periods when 7 cheeses are produced and others where only 2 or 3 varieties are produced. In fact, our cheese production depends on the quality of the milk, its availability and the season. That said, we have almost all the time Sicilian cheese and ricotta which are two cheeses typical of our region. They are strongly related to the story of Beja »

Everyone agrees that Béjà and cheese have a common story, but do you know where this tradition comes from? On the question Zyed is inexhaustible: “At the beginning of the 20th century, before the 1st World War, inhabitants of the north of the Mediterranean came to live in Tunisia. They immigrated there and then brought their know-how to several regions of Tunisia, including Béjà, where there was an entire district called Small Sicily. For my part, I was able to acquire this know-how of my family. It’s actually a question of inheritance”. Driven by his passion, Zyed Ben Youssef began producing in his Borj Lella manufacturing workshop more than a decade ago. Its concept, which has evolved a lot since then, consists of observation of production, participation in initiation workshops or outright training for those who want it.

The project as a whole was born in 2003 with sheep farming. Zied before at the time won a prize at the national level in terms of breeding. Today, Borj Lella is engaged in a program of valorization of sheep’s milk, through the production of cheese, the Sicilian of Béjà.

Moreover, a labeling project for cheese Borj Lella has been filed for 2 years but some official parties of the state are opposed to the name of this variety of cheese and that is why the labeling is blocked. Irony of when we know its origin! Spend a day in Borj Lella is to taste cheese at will, go for walks on foot, push to the dam adjoining, climb the mountain or stay with family or friends under the trees and breathe fresh air while admiring nature so beautiful and generous. By spring, Borj Lella will be offering rides to donkeys. A nice program that will surely please young and old.

The workshop of Borj Lella proposes a table of hosts with a unique menu composed of the famous “Berzguen” of Beja. A couscous whose grain is of incredible finesse and crisp and delicious dried fruits with a saffron sauce. A true delight ! On your next visit to Borj Lella, you will meet Zied. Very welcoming, he likes to receive and loves cycling and his cheeses, although this job is not his first vocation. A former rugby player, he played for Béjà before playing in the national rugby team. Zied studied mechanics and worked one day in a bank and another as a teacher, before making the decision to leave everything and return to the land of his ancestors to launch his project. Today, its sign makes the happiness of tens of thousands of people who make visit to the happy owners of the places. The company has created a dozen jobs in the region and plans to expand to medium-term housing.