Campaign 2017: a year of flight for the figs of Djebba AOC 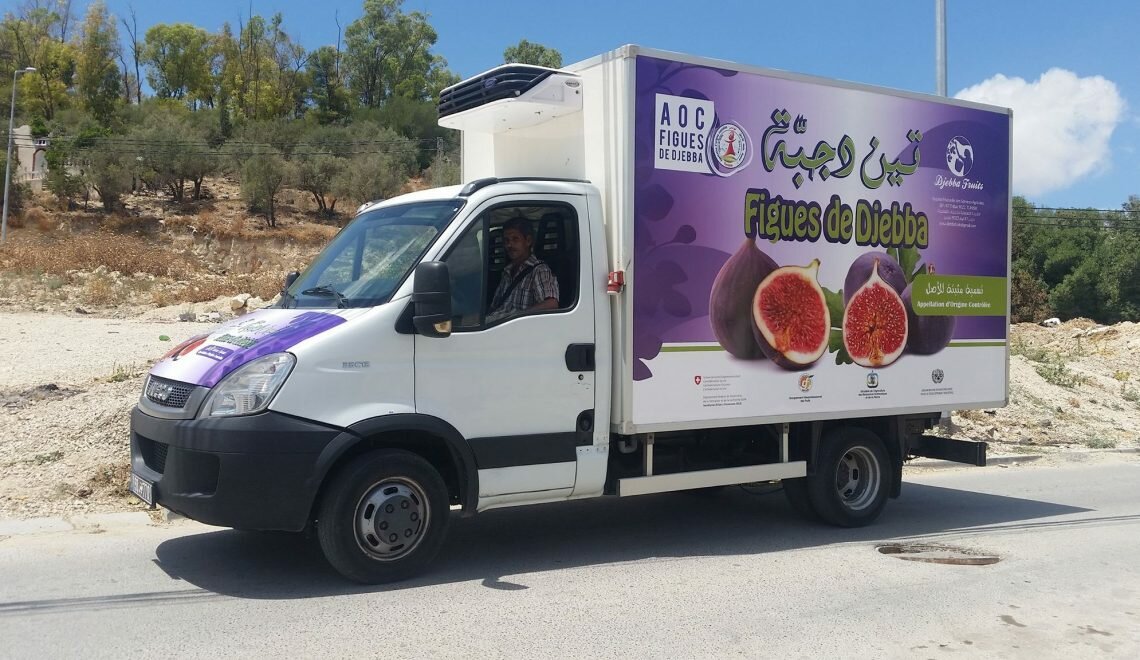 More than 10% of the production of figs from the village of Djebba (Thibar) was marketed with the AOC (Appellation d’origine contrôlée) certification during the 2017 campaign. Djebba Fig is the only fruit in Tunisia with AOC. The certified AOC production was marketed on the MG and Carrefour supermarket network and was exported to France, Canada and Dubai.

The 2017 crop year of the “Djebba Figs” with Appellation d’Origine Contrôlée (AOC) has come to an end and has been successfully closed. This year more than 10% of the production of figs from the village of Djebba in the governorate of Béjà has been marketed with the certification AOC.

Djebba figs are the first and only fruit in Tunisia to have received a registered designation of origin (AOC) by decree of the Minister of Agriculture. The AOC is an official label certifying the fruit’s compliance with the specific requirements of quality, origin, know-how and traceability. The National Institute of Standardization and Industrial Property (INNORPI) has been designated as the body responsible for the control of the fig of Djebba AOC and carries out the necessary audits with the farmers of Djebbaois. The labeling of Djebba figs with AOC started in 2014. In the same year, 67 farmers grouped themselves to create the mutual society of agricultural services (SMSA) “Djebba Fruits” in order to sell AOC figs directly on the markets. At the beginning, the quantities certified AOC of high quality accounted for barely 2% of the local production. But in the last three years things have changed a lot. Today, SMSA has the only packaging unit in Djebba, which has obtained technical approval for export, and a refrigerated truck that ensures compliance with the cold chain up to the final point of sale. For the SMSA, the AOC offers an indisputable added value: in 2016 the AOC figs were already sold up to 80% more expensive than the standard figs. During the 2017 campaign, several operators began marketing the certified figs, such as the “Fruits Medina” company managed by a djebbaois, and the Tunisian exporting company “Sadira” which buys from the farmers of Djebba who have joined the AOC approach. In Tunisia, AOC figs were available for sale on the national network of MG supermarkets, in Carrefour and at the point of sale from the producer to the consumer of the Office of the Domanial Lands in Tunis. In addition, this summer the AOC figs were also exported to France, Canada and Dubai. All these efforts made it possible to achieve a very positive assessment suggesting a very promising future for the fig of Djebba AOC.

The dynamism created around the fresh fig AOC has also encouraged the development of processed products. The women of the village united to valorize the “Fig of Djebba” outside the agricultural season. The “Délices de Djebba” products are marketed by the SMSA “Djebba Fruits” and by the “KounouzDjebba” Agricultural Development Group created in 2016, which includes some twenty women.

The AOC has also enabled the development of cultural activities. In 2017, the Djebbaois created an association to promote the AOC and to revive an annual festival at the foot of the Goraa mountain. In July 2017, the village of Djebba was celebrated on the occasion of the 24th edition of the former festival of Thibar, which was renamed “Festival of the Fig of Djebba AOC”. The experience of Djebba is considered by several Tunisian institutions as a model of success, which shows the value of the AOC label as a catalyst for regional development. The fig as a flagship product makes the village speak, improves its visibility and reputation and thus creates a new dynamic economic and also tourist highlighting the cultural as well as historical aspects of the region.

All the development activities of the Djebba AOC fig are developed with the support of the “Food and Agricultural Market Access Project” (PAMPAT), which is implemented in Djebba by the United Nations for Industrial Development (UNIDO) in collaboration with the Ministry of Agriculture, Hydraulic Resources and Fisheries and the public-private GIFRUITS with funding from the State Secretariat for the Swiss Economy (SECO). Aware of the potential of the village, the Ministry of Tourism and Handicrafts has become an associated partner to encourage and develop alternative tourism in Djebba.